Another round of talks aimed at agreeing a ceasefire in Ukraine is to take place in Turkey.

The talks between the Ukrainian and Russian delegations come as the fighting appeared to be at an impasse, with the two sides swapping control of a town in the east and a suburb of the capital.

Ukrainian forces have recaptured Irpin, northwest of Kyiv, from Russian troops, who were regrouping to retake the area, President Volodymyr Zelensky said on Monday as he sought to rally the country.

“We still have to fight, we have to endure,” Mr. Zelensky said in his nightly video address to the nation. “We cannot express our emotions now. We can’t raise expectations just so we don’t burn out.

Ahead of the talks in Istanbul, Ukraine’s president said his country was ready to declare its neutrality, as Moscow demanded, in comments that could give impetus to the talks.

Mr Zelensky said over the weekend that a compromise might be possible on “the complex issue of Donbass”, the hotly contested region in the east of the country.

It is unclear how this could be reconciled with his position that “the sovereignty and territorial integrity of Ukraine are beyond doubt”.

Russia has long demanded that Ukraine give up hope of joining NATO, which Moscow sees as a threat.

Mr. Zelensky, for his part, stressed that Ukraine needs its own security guarantees as part of any agreement. 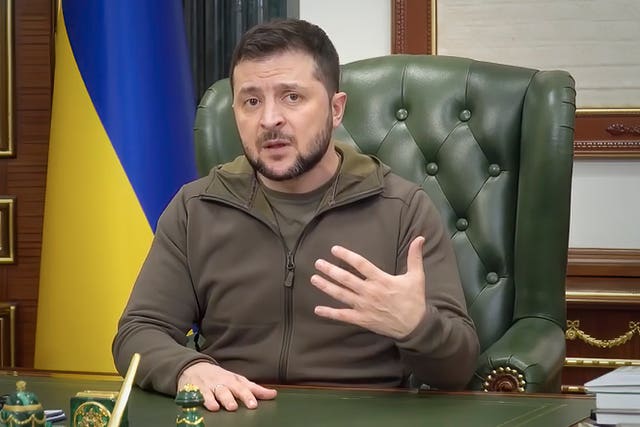 As fighting raged across the country, the mayor of Irpin, which has seen some of the heaviest fighting, said the town had been “liberated” from Russian forces.

A senior US defense official said the United States believed the Ukrainians had also retaken the town of Trostyanets, south of Sumy, to the east.

The official said Russian forces remained largely in defensive positions near the capital, Kyiv, and made little progress elsewhere in the country.

The official said Russia appeared to be placing less emphasis on ground operations near kyiv and focusing more on Donbass, the predominantly Russian-speaking region where Moscow-backed rebels have been waging a separatist war for eight years.

Late last week, with its forces bogged down in parts of the country, Russia appeared to be reducing its war aims, saying its main goal was to take control of Donbass. 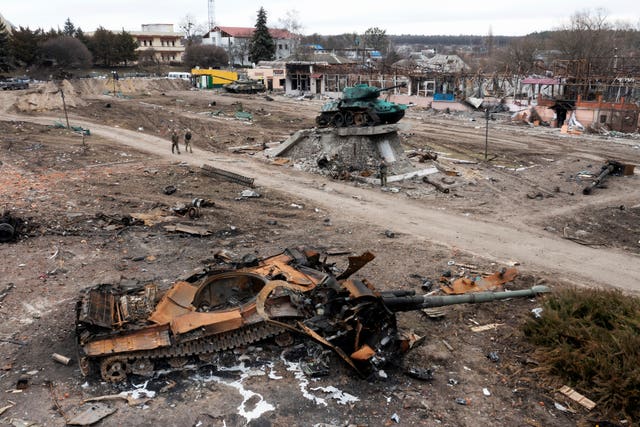 Local residents walk past a damaged Russian tank in the town of Trostyanets, east of the capital kyiv (Efrem Lukatsky/AP)

Russian President Vladimir Putin’s possible face-saving exit strategy has raised fears among Ukrainians that the Kremlin is aiming to divide the country, forcing it to cede some of its territory.

In recent days, Ukrainian troops have pushed the Russians back into other areas.

In the town of Makariv, near a strategic highway west of the capital, Associated Press reporters saw the remains of a Russian rocket launcher, a burnt-out Russian truck, the body of a soldier Russian and a destroyed Ukrainian tank after fighting there a few days ago. .

In the nearby village of Yasnohorodka, the AP witnessed positions abandoned by Ukrainian soldiers who had moved further west, but no sign of Russian troops.

Russia has destroyed more than 60 religious buildings across the country in just over a month of war, with most of the damage concentrated near kyiv and in the east, the Ukrainian military said in a message on Tuesday. 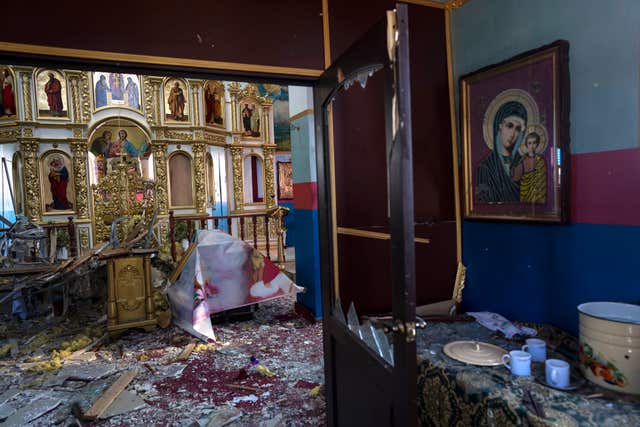 He said the Orthodox Church – the country’s majority religion – was the most affected, but mosques, synagogues, Protestant churches and religious schools had also been destroyed.

Head of Ukraine’s State Service for Special Communications Yurii Shchyhol blamed ‘the enemy’ without specifically naming Russia and said most customers were cut off from phone, internet and mobile services to ensure the cover of the Ukrainian army.

Also on Monday, an oil depot in the Rivne region of western Ukraine was hit by a missile, the governor said, in the second attack on oil installations in the region near the Polish border. .

Make the world a place to live

Much of the current digital “buzz” is about Web3 and the Metaverse. Insist that marketing and digital teams work together to develop an appropriate application strategy All the other articles seem to present thoughts and opinions regarding these new frontiers and what they offer to the digital evolutionary arc. The feeling of excitement is palpable. […]

St. James’s Place (SJP) was left reeling in 2019 after details of its opulent culture – paid for by customers – emerged. The wealth manager has promised to change, but recent pay awards to its top executives have some wondering if the company has learned its lesson. A whistleblower explained three years ago how the […]

GSCW chat: place of predictive and prescriptive analysis in the supply chain

CHAT SUBJECT AT THE HEART OF THE HOME: Predictive and prescriptive analytics DETAILS: When making a value proposition to current and potential customers, prescriptive and performance analytics should be part of your continuous improvement plan. Randy Ofiara discusses all things continuous improvement and the value of historical data as a way forward. SPEAKER: Randy Ofiara, […]