WHAT’S THE TEAM: The South Region Men’s Cross Country Team gather before the awards ceremony after placing seventh in the state at the NJSIAA Champions Meet November 12. (Photos by David Biggy)

Coming out of the NJSIAA Group IV Championship Meet, the Southern Region Men’s Cross Country Team had a reasonable expectation of placing in the top six of the Champions Meet. But that’s easier said than done when a team’s runners can’t assess the entire field.

“It’s a weird race because not only do you have all the teams that have favorites, but then you add all the generic individuals and that makes it a lot more difficult,” said coach Scott Baker, whose Rams finished seventh in the state with 198 points at Holmdel Park on Nov. 12. “There are a lot of good guys in this business and you never know how it’s going to end. Our strategy was just to run. I had no expectations for the boys. I didn’t want them to have that kind of pressure.

Unsurprisingly, several of them were a little nervous as the race approached.

“We knew the weather wasn’t perfect. It was a bit windy, the course was a bit muddy from the rain last night, and other teams had some really good riders here and we had to push,” said junior Santino D’Amelio. “So yeah, we were a little nervous.”

It was the Southern group’s first time at the Meet of Champions, after all.

“There are a lot of good guys here,” said elder Fabian Ramales, the Rams’ all-season leading runner. “These guys were a lot quicker than I thought.” 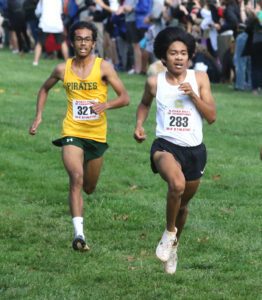 The pace was fast from the start and Ramales did his best to stay in the lead pack for the first third of the race. Unfortunately, once they got to the infamous “bowl” along the northwest corner of the course, Ramales thought it was time to run his race.

“The goal was to stay connected to the front runners for as long as possible,” he said. “I wanted to see how long I could hold out and survive. When we had the bowl, I decided to let them go.

Eventually the lead group split up a bit and Micah Lawson from Rahway shunned Patrick Ditmars and Nick Kuenkel from Cherokee, George Andrus from Haddonfield and Nicholas Sullivan and Joe Barrett from Christian Brothers Academy. Lawson came out of the woods 300 yards from the finish line and took first place in 15:33. Ditmars was second (15:39) and Andrus third (15:40).

As for the Southern crew, Ramales led the way with a time of 16:18, good enough for 17th overall, while D’Amelio fired up the jets on the stretch and passed North Hunterdon’s Jeremy Bavaro with 20 meters to go, finishing 25th. place at 4:31 p.m.

“I felt good so I was able to keep my pace knowing I would be able to take a few of them off as they were falling back,” D’Amelio said. “I was in the right frame of mind to race today. I probably could have hit a little harder, but it was the best shot I’ve had in a while. I made this race count as much as possible. I knew Andrew wasn’t having a great race, so I had to pick it up for him. 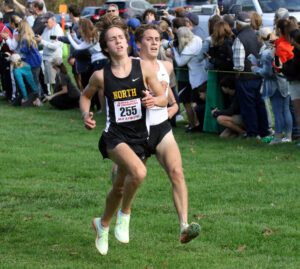 Senior Andrew Bowker finished in 61st place at 4:58 p.m., and junior Jack DeHart and second Kyle Skiendzielewski crossed the line at the same time (5:57 p.m.), sandwiched around Nick Loffredo of Manchester, to place 123rd and 125th. Sophomore Logan Baker was 140th in 6:30 p.m. and senior Christian Schiattarella was 149th in 6:51 p.m.

“It’s a very strategic course,” Bowker said. “You really have to position yourself well. Everyone got out really fast and I kind of got stuck too far going up the first hill. From there it was hard to run at a faster pace and try to get ahead.

The Rams’ seventh-place finish was their second-highest in program history. Southern finished eighth in 2008 and sixth in 2009.

“It’s a special crew,” Baker said. “They’ve achieved a lot this season, and this might be the best complete team, top to bottom, we’ve ever had. We’ve been battling illness this week with a few guys, so we really wanted to survive. and trying to be a top 6 team. We don’t practice a lot here either, so all in all our guys did a great job.

Find your place in history: volunteer!

USA (MNN) — You’ve probably heard us use this phrase once or twice: “Find your place in history. It’s about connecting with the stories we share here every day. God may (or may not) call you to give up everything you know and be a missionary in Africa. But He’s calling every believer to do […]

By David Greenham An experimental drama, no matter how tempting, has to find a worthwhile outcome. This is not the case with Lucas Hnath. The thin place by Lucas Hnath. Directed by Dee Dee Batteast. Lighting design by Karen Perlow, costume design by Jennifer Greeke, sound design by Aubrey Dube. Produced by Gloucester Stage, East […]

A shelter-in-place notice is still in place for an area north and east of a fertilizer plant that burned Sunday in Moses Lake. The Wilbur Ellis fertilizer plant outside Moses Lake burned to the ground Sunday afternoon when the building collapsed, and burning continued long after the fire was brought under control. Grant County Sheriff’s […]