The speed pads are made of rubber and are 6 feet wide, 7 feet long, and 4 inches high. We can fit in every lane of traffic. The total estimated cost for all cushions is just over $7,000.

The city has a process for obtaining neighborhood traffic calming measures. A resident must apply. Then the staff develops a project area and provides a petition to the resident who requests it. If at least 70% of neighbors sign the petition, city staff will conduct a traffic survey and note the results.

If the project meets the scoring criteria, staff will provide the requesting resident with a traffic calming design proposal. The proposal must obtain at least 60% support among the neighbors. If so, the Transport Committee will consider the proposal. Once the committee is approved, the project is added to the city’s work list.

Traffic calming measures can take the form of speed bumps, planters, plastic bollards, painted crosswalks, or other inexpensive fixtures that can be removed if necessary. The city monitors traffic activity after the measures are installed to see if they achieve the desired effect.

A total of four speed pads will go on Sang Avenue near Asbell. Two cushions, one for both lanes of traffic, will go just south of Lawson Street. Another pair will go just north of Skyler Drive.

Most of the traffic-calming requests on Sang Avenue came from neighbors south of Lawson Street, said Dane Eifling, the city’s mobility coordinator. City staff want to start with speed pads in the school zone, monitor traffic activity and see if more pads are warranted after that, he said.

Sang Avenue has higher traffic than neighborhood streets that typically benefit from traffic-calming measures under the program, Eifling said. The speed limit is 25 mph and 20 mph in the school zone when children are present. The street has an average of about 2,300 cars passing through it per day, according to city data. By comparison, Stubblefield Road and Harold Street receive around 1,600 and 2,000 cars per day respectively.

Sang Avenue needs better sidewalks, which would help resolve any conflicts between pedestrians and cars, committee members discussed Tuesday. The sidewalks south of Lawson Street are narrow and have mailboxes in the middle of them.

The city establishes an annual list of sidewalk projects based on a rating system. Board members Sarah Bunch and Holly Hertzberg asked the staff to consider Sang Avenue for next year’s roster.

“This is definitely an area that we should definitely look at for next year’s sidewalk improvements,” Bunch said. “I know we have a big list of sidewalks, but if we’re going to put our money where our mouth is, we need to focus on those schools.”

Resident Martha Londagin wrote a letter to the city asking for as many speed bumps as possible on Sang Avenue. Londagin lives on Lawson Street near where the South Speed ​​Cushion is offered on Sang Avenue.

“We have a HUGE problem with cars traveling at high speed north and south on Sang Avenue in this neighborhood,” Londagin wrote. “I constantly have to yell at drivers when I’m running, walking or biking here to ‘SLOW DOWN,’ and they don’t respond nicely.”

Two speed pads for each lane of traffic on Stubblefield Road will go east of Summerhill Drive with two more west of Piccadilly Lane. Stubblefield has a stretch approximately 2,240 feet long from Old Missouri Road to where the street bends south to connect with Harold Street.

The maximum speed recorded in the traffic study for Stubblefield Road was 57 mph. The speed limit is 25 mph.

“This is one of our highest-rated streets out of all the requested streets in terms of the matrix, and we’ve got the neighborhood’s full support,” Eifling said.

Two speed pads will go on Harold Street east of Lee Avenue. One for eastbound traffic will go to the three-way intersection with Stubblefield Road. The intersection already has a small median. Drivers traveling west on Harold Street sometimes cross the eastbound lane to bypass the median, Public Works Director Chris Brown said. Putting a speed pad in the eastbound lane will hopefully deter drivers from doing so, he said.

The maximum speed recorded on Harold Street during the traffic survey was 61 mph. The speed limit is 25 mph.

“People pass by and pass by too quickly,” Brown said. “It will clear this intersection.”


The city is providing traffic calming devices on Stubblefield Road, Harold Street and Sang Avenue due to the demands of residents in these areas. Visit nwaonline.com/220904Daily/ for today’s photo gallery. (NWA Democrat-Gazette/JT Wampler) 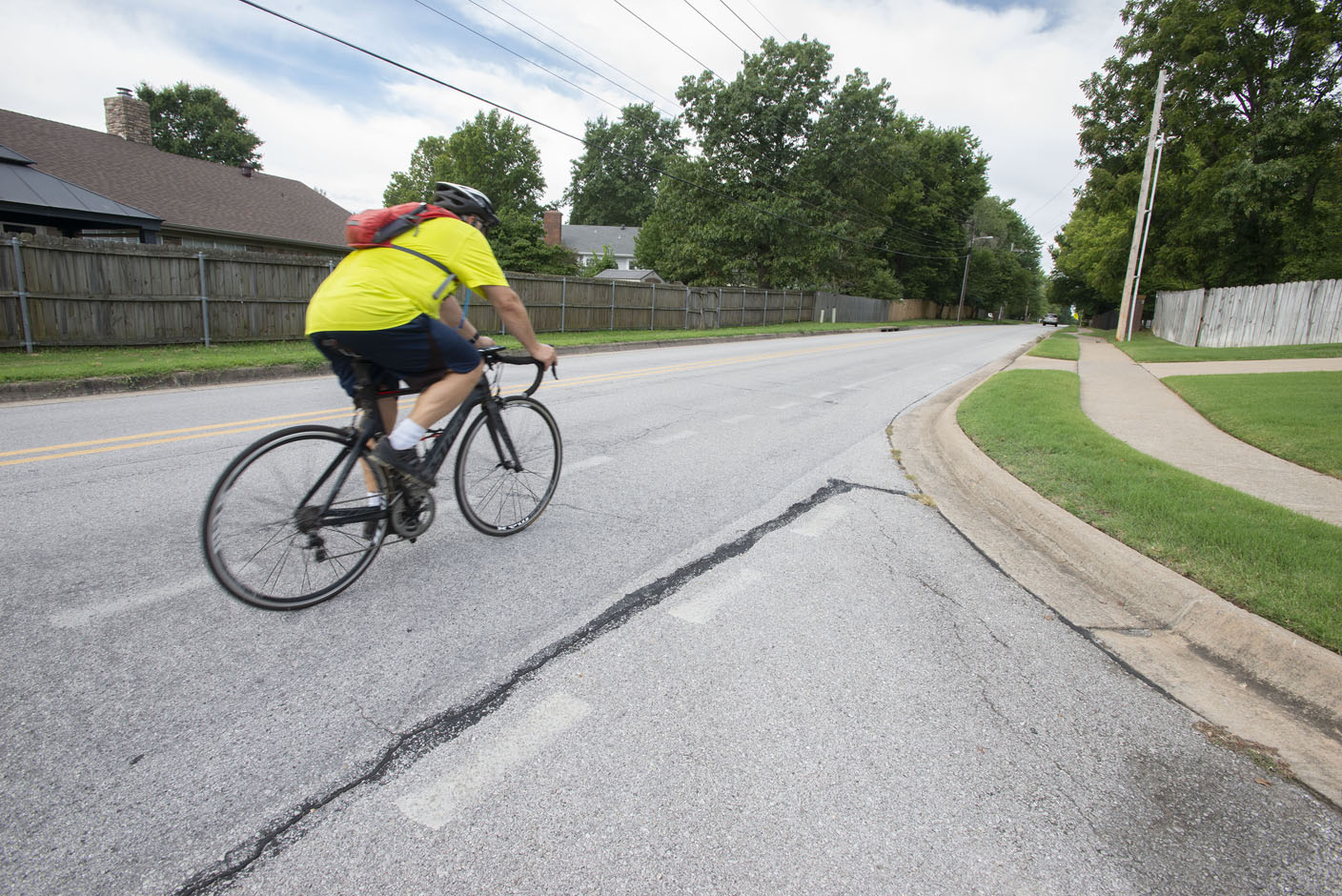 A cyclist rides Stubblefield Road in Fayetteville on Thursday. The city is providing traffic calming devices on Stubblefield Road, Harold Street and Sang Avenue due to the demands of residents in these areas. Visit nwaonline.com/220904Daily/ for today’s photo gallery. (NWA Democrat-Gazette/JT Wampler)

DOWNE TOWNSHIP, NJ – There are no neon lights, no boardwalk, and entertainment includes the constant lapping of Delaware Bay waves and the occasional sight of a thousand snow geese flying over salt marshes like windswept clouds. For the roughly 1,500 people who live in this rural community in Cumberland County, 60 miles south of […]

Let the chopping and sautéing begin. Eden Hall Campus of Chatham University in Richland is hosting its first-ever “pitch” contest, aimed at people in the area who have ideas about new or emerging food and agriculture businesses. The competition, sponsored by Chatham’s Center for Regional Agriculture, Food and Transformation, or CRAFT, will be held from […]