SIX YEARS AGO, EU policymakers feared Brexit would trigger a domino effect across the continent. Britain’s vote was expected to embolden anti-Brussels parties and bolster demands for EU referendums in other member states. France’s far-right leader Marine Le Pen went so far as to declare it was the beginning of the end for the bloc – an occasion as momentous as the fall of the Berlin Wall, she said.

Now the picture is quite different. The predicted widespread revolt against the European project has not materialized, and even some of the once staunchest Eurosceptics have toned down their rhetoric. More common today is a kind of softer Euroscepticism – or “constructive” Euroscepticism, as it is called – which involves opposition to certain aspects of European integration, but not a total rejection of EU membership. EU.

EU advocates themselves will admit that the system is far from perfect. Noelle O’Connell, CEO of European Movement Ireland, argues that the EU is best served if people debate and engage with its work. However, she says it has to come from a place of “genuine constructive criticism” if the issues are to be resolved.

It is at least encouraged by EU plans to establish an online ‘Have your say’ portal as a one-stop-shop for voters to voice their opinions on EU policy and for the EU to consult citizens directly.

“This is an important step for the EU as arguments around the ‘democratic deficit’ still resonate,” she said.

Barry Colfer, research director at the Institute of International and European Affairs (IIEA), also thinks that critical opinions play an important role. “We should be wary of distasteful or exclusionary politics, but having a Eurocritical or Eurosceptic discussion is a healthy part of democracy.

It is healthy to have criticism of EU institutions, or our relationship with the EU, in the market of ideas. When is Euroscepticism attached to xenophobia or anti-minority views? Well, that’s obviously another matter.

But Colfer tells The newspaper that the power of Eurosceptic parties should not be overestimated. “If you look at the places in Europe where Eurosceptics have served in power, you can count them on one hand. It is the center – Chancellor Schultz in Germany, President Macron in France, Prime Minister Draghi in Italy – that holds the reins of political power. Yes, their bases have been eroded and some of their agendas have been affected by Eurosceptic rhetoric, but every government in the EU is still led by a party that comes from either the centre-right or the centre-left.

Many anti-EU figures have also changed their strategy in the wake of Brexit. “The experience of the UK’s withdrawal has certainly softened the cough of Eurosceptic voices,” says Colfer. “The fact that it’s been so difficult for the UK, with its great civil service and strong institutions… I think that called for their bluff.”

An anti-Brexit protest in London in 2019.

The new strategy of focusing on reform, he says, is “at least partly linked to the traumatic and unedifying nature” of Britain’s departure.

Paul Schmidt, co-editor of the recent book Euroscepticism and the Future of Europe, agrees that the fallout from Brexit has made leaving the EU far less attractive. He says the EU’s response to the pandemic – from the joint purchase of vaccines to its €800 billion recovery fund – has also boosted its legitimacy in the eyes of the public.

“The lesson for far-right populist parties is that if they want to be successful, they need to tone down their stance and not talk too much about leaving the EU, because that’s something the vast majority of the public would reject.”

A soft veil on anti-EU sentiment?

But Schmidt, who is general secretary of the Austrian Society for European Politics, warns that talk of reform can sometimes mask deeper anti-EU sentiment.

“If you use softer rhetoric with the aim of constructing a new strategy to destroy the EU from within, then I wouldn’t call it soft Euroscepticism. Many far-right populist parties have been smart enough to put themselves in the center of the political arena by softening their stance on the EU, when in reality this is just another way of being anti- EU.

In this country at least, the Eurosceptic forces are still very much on the fringes of political life. A Red C/European Movement Ireland poll published last month showed that 88% of people support our staying in the EU. Ireland’s size means the EU is seen as an anchor in turbulent times, according to O’Connell.

“Being in the EU allows Ireland to have a seat at the table and shape decisions for the common challenges facing Europeans,” she says. “For this reason, Irish people recognize how good it feels to be a member of the EU.”

Colfer says the EU has also been seen as a place where Irish sovereignty is protected. The common narrative in the UK during the Brexit campaign, by contrast, was that the EU was undermining British independence. “We have a different attitude to politics here as a former colony,” he says.

“I think there’s a sense that the EU has been a place for Irish sovereignty and the Irish language, and a place where figures like John Hume have been staged.”

Where misinformation creeps in

However, O’Connell warns that Ireland’s strong support for the EU should not be taken for granted. 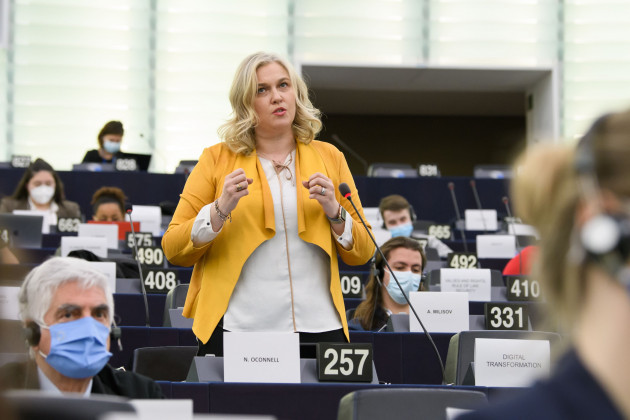 Noelle O’Connell from the European Movement in Ireland.

“One of the benefits of the Brexit negotiations is that they have facilitated prolonged engagement with people about the benefits of being in the EU. But the EU is not just Brexit, and like Brexit no longer dominates our news feeds as it once did, there is a challenge here in how to successfully engage Irish people on what else the EU is doing.

Schmidt is aware that Europe’s current challenges could also increase animosity towards the EU. “We have many ingredients of a perfect storm if you take energy prices, inflation, etc.,” he said. The newspaper.

“We know these are the conditions that can lead to a return of hardline populist parties, so the question now is how quickly and effectively we can tackle these issues. There have been huge steps of integration in military terms, and in terms of economy, health and climate, but that is only one side of the story.

The risk of it all collapsing might be low, but EU advocates still worry about the future. “I think those are watershed moments,” Schmidt says. “The longer the war [in Ukraine] lasts, the more difficult European cohesion and solidarity will be – and if we lose these things, we will give much more space to nationalist voices.

This work is co-funded by Journal Media and a grant program from the European Parliament. Any opinions or conclusions expressed in this work are those of the author. The European Parliament has no involvement or responsibility for the editorial content published by the project. For more information see here.

New Jersey, United States – This Clean-In-Place (CIP) System Market The report provides a comprehensive overview of significant aspects that will drive market growth such as market drivers, restraints, prospects, opportunities, restraints, current trends, and technical and industrial advancements. The detailed study of the industry, development and improvement of the industrial sector, and new product […]

The McDonald’s monopoly will be back; what is it, when will it happen and why are so many people excited about it?