The hits to the pound continued for the fourth straight week as the bears refused to give up. GBP/USD lost over 200 pips to hit a new 2-year low at 1.2157, breaching several critical support levels. The US dollar has become the preferred safe haven amid renewed global growth and inflation fears. As a new week dawns, Cable is looking for a bottom, with all eyes on US retail sales and UK inflation data.

GBP/USD: British recession on the way

Nothing has changed for GBP/USD as the fundamentals affecting the currency pair have remained more or less the same. Monetary policy announcements from the Bank of England (BOE) extended into a second week, with the cable recording new multi-month lows almost every new trading day.

The BOE predicted a recession in the final quarter of this year after announcing a hawkish 0.25% rate hike in its monetary policy decision on May 5. external flows supported sentiment around the greenback.

China’s zero Covid policy and a protracted supply chain crisis induced by the Russia-Ukraine war and its impact on global growth have raised concerns as the world’s second-largest economy experiences a slowdown. The flight to safety has bolstered safe-haven demand for the dollar, adding to the GBP/USD’s difficult situation.

The warmer-than-expected U.S. consumer price index (CPI) heightened concerns about global growth as it reignited aggressive calls for Fed tightening. Meanwhile, the UK economy contracted by 0.1% month-on-month in March while registering a meager expansion of 0.8% in the first quarter of 2022, adding to the pain for the pound. GBP/USD sold off aggressively in the second half of the week as the divergence in macroeconomic and monetary policies between the UK and the US returned to center stage. Additionally, markets experienced a classic risk aversion profile that favored the ultimate safe haven, the dollar, amid heightened growth concerns.

A relief rally seeped into the final day of trading of the week, providing temporary respite for sterling bulls as the dollar corrected amid improving sentiment. Although US Treasury yields continued their week-long rise to near multi-year highs on the Fed’s hawkish commentary.

Week Ahead: US Retail Sales and UK Inflation Stand Out

It now remains to be seen whether the GBP/USD rally could carry over into the new week, which is expected to be busy.

On Monday, Chinese activity data will drop in the Asian session, which could have a significant impact on the market’s perception of risk sentiment. Ultimately, this could set the tone for the markets for the week ahead.

The UK and US calendars remain light on Monday, with only hearings on the BOE’s monetary policy report scheduled.

UK labor market data will drop at 06:00 GMT on Tuesday ahead of the US retail sales release. On the same day, amid a slew of Fedspeak, Chairman Jerome Powell’s speech will be watched closely, as he will likely speak on inflation at the Wall Street Journal’s Future of Everything Festival.

Britain’s CPI will be in the spotlight on Wednesday after the inflation rate hit a new multi-decade high of 7.0% year-on-year in March, which will be followed by weekly US jobless claims. United States and existing home sales data in the United States on Thursday.

Friday will see monthly retail sales in the UK, which showed a sharp contraction in consumer spending a month ago. Meanwhile, the speech of the chief economist of the BOE, Huw Pill, will also be followed. In addition to macro events, Fed expectations and general market sentiment will be closely watched for any significant impact on the major.

The bearish flag formation that appeared on the daily chart last week seems more or less complete. Additionally, the Relative Strength Index (RSI) and momentum indicators on the daily chart are both pointing to extremely oversold conditions, suggesting that the pair could stage a rebound in the near term.

On the other hand, buyers might remain reluctant to bet on a correction if GBP/USD closes daily below 1.2200 (psychological level) and starts using this level as resistance. In this case, the next bearish targets line up with 1.2100 (psychological level, 15th May 2020, lower) and 1.2020 (static level from August 2019).

The FXStreet forecast poll indicates an extremely bearish view on the one-week outlook, with the average target at 1.2125. The one-month outlook, however, leaves the door open for a strong recovery. 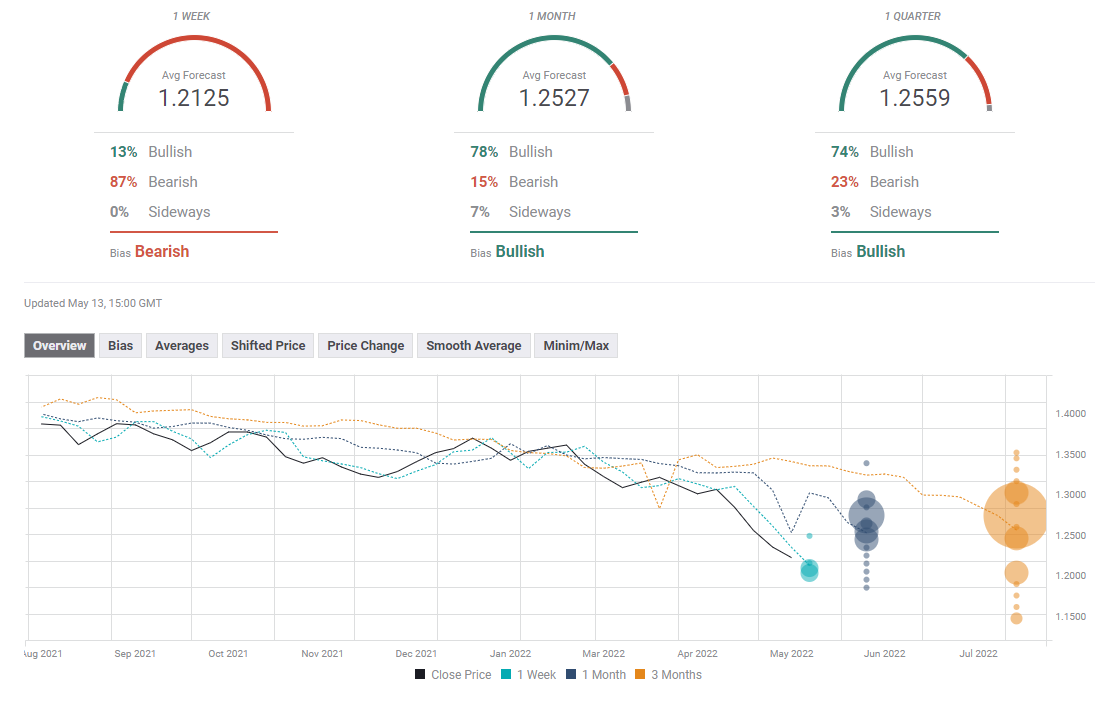 Mason, Ohio- Celebrating its 50th anniversary in 2022, Kings Island has announced the return of live music to the Timberwolf Amphitheater this season with a lineup of concert series including The Avett Brothers, Berlin & A Flock of Seagulls, 3 Doors Down and Five for Fighting with special guest The Verve Pipe. […]

Booming country newcomer Bailey Zimmerman has just dropped an emotional and overly relatable music video for his latest song, “Rock and a Hard Place.” The thrilling visual vividly depicts what happens when a couple is about to break up. Zimmerman, who acts as the fictional protagonist, is still in love with his wife, but unfortunately […]

The guaranteed rate field is a strange place to hit

Long before Tom Tango reached the level of Senior Database Architect for MLB Advanced Media, he established his own site in which he explores baseball’s critical metrics. A recent example involves Wins Above Replacement. Tango recently developed CoreWAR and has two simple formulas for calculating the WAR of a thrower or a non-thrower. Reading the […]